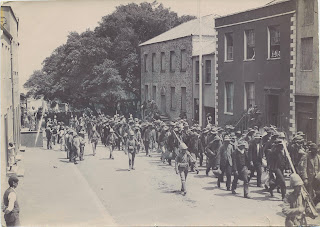 Boer Prisoners under escort, Main Street, Jamestown
The Second Anglo-Boer War, the origins of which were rooted in over a century of conflict between the Boers and the British, took place between 11th October 1899 and 31st May 1902 with the British fighting the two independent Boer Republics of the Transvaal and the Orange Free State.
The first sizable batch of Boer prisoners of war taken by the British consisted of those captured at the Battle of Elandslaagte on 21 October 1899.  At first many were put on ships but, as numbers grew, the British realised that they could not accommodate all POW’s in South Africa.  The British feared they could be freed by sympathetic locals, they already had trouble supplying their own troops in South Africa, and did not want the added burden of sending supplies for the prisoners.  Britain therefore chose to send many POW's overseas.  The first of these camps off the African mainland was opened in Saint Helena, which ultimately received over 5,000 and became quickly overwhelmed.   5,000 more were sent to six camps in Ceylon, 1,443 to Portugal and others to five camps in Bermuda and thirteen camps in British India, which then included what is today Pakistan. In all over 25,000 POWs were sent overseas.
On April 5, 1900, Governor Sterndale published the following proclamation: In a few days the troopship Milwaukee, escorted by H.M.S.Niobe, will arrive with prisoners of war.  No unauthorized persons will be allowed on the wharf at the time of disembarkation.  The police will assist as far as they can the military, acting under the orders of the officer commanding the troops, in keeping order. H.E. the Governor expresses the hope that the inhabitants will treat the prisoners with that courtesy and consideration which should be extended to all men who have fought bravely in what they considered the cause of their country, and will help in repressing any unseemly demonstration which individuals might exhibit.
﻿ ﻿﻿﻿
Deadwood was the site of the first of the Boer POW camps established on the island.  Some recalcitrant or insubordinate prisoners were confined for a time at High Knoll Fort and a second camp known as Deadwood No. 2, or the Peace Camp, was set up when quarrels broke out between the irreconcilables and those who were willing to take the oath of allegiance to the British.  Further quarrels between Free Staters and Transvaalers meant they had to be separated and so the Broadbottom Camp was established.


On 11th April 1900 the troopship SS Milwaukee, escorted by HMS Niobe, arrived off St Helena with 514 Boer prisoners on board including the Boer General Piet Cronje (accompanied by his wife) who had surrendered on the 27th February with 4,000 of his men to Lord Roberts after the battle of Paardeburg.  Illustrating his arrival on the island of St Helena, Punch magazine depicted the Boer General saluting the ghost of Napoleon and saying 'Same enemy, Sire! Same result.

General and Mrs Cronje were accommodated at Kent Cottage, some distance from Deadwood from where he used to ride to visit his men.
A week after the 'Milwaukee', the steamship, 'Lake Erie' arrived with another batch of 394 prisoners including 34 officers.  On 1st May the transport ship, 'Bavarian' brought 1,099 men.  Another ship to bring prisoners was the 'Mongolian' when it landed 649 men on 3rd February 1901 bringing the total to that date to 4,689 men.  The number of prisoners was swollen during the beginning of 1902 with the arrival of the 'Orient' with 1,050 prisoners and the 'Brittania' with 39 officers, among them General Ben Viljoen.  St Helena thus held both the first and last of the important Boer generals captured during the war.  The death rate in the POW camps of approximately 3% is cited as proof that the conditions under which the prisoners lived on the island were of a high order.
This is in sharp contrast to the death rate at the start of the war amongst the Boer civilians who remained in South Africa.  By mid 1900 the British had become exasperated with the military situation.  The Boers seemed to be able operate with impunity in the veld and a new course of action was decided upon.  In the last months of 1900, the British began to build what eventually became 45 separate tented camps, established to systematically remove women and children from their farms to prevent them aiding and supplying the Boer soldiers in the field.  Civilians were taken from their farms and interned in the camps, but the insanitary conditions cost many their lives as hunger and disease ran rampant.  Up to October 1901, the number of inmates in the 45 camps increased to 118,000 Whites and 43,000 non-Whites and the death rate amongst the whites was 34%.  At one stage in the Kroonstad camp the death rate was 87%.
Emily Hobhouse visited some of the camps in the Orange Free State between January and April 1901 and what she found shocked the public in England.  Her report led to a government enquiry and in their report, the Committee criticised the camps and listed a number of recommendations for improvement.  Lord Milner, the High Commissioner for Southern Africa, assumed direct control of the camps in November 1901 and acted on the recommendations in the report to improve the conditions and rations in the camps.  By January1902 the overall mortality rate had reduced to 16% and by February to 6.9%.  By the end of the war the death rate had fallen below the peace-time rate, but decades of resentment had been generated.
By the end of the war 27,927 Boers had died in the South African camps, of whom 4,177 were adult women and 22,074 were children under the age of 16.  These figures are even more disturbing when compared to the combat fatalities for the entire war where some 7,091 British soldiers died, while on the Boer side some 3,990 burgers were killed, with a further 1,081 dying of disease or accident in the veld.
The arrival of another high profile prisoner was reported in the The New York Times of June 28th 1900.
JAMESTOWN, St. Helena, June 27. -- Sarel Eloff, President Kruger's grandson, who was captured by the British at Mafeking, landed here to-day with eleven officers and ninety-eight troopers, mostly foreigners. The prisoners were immediately sent on to Deadwood the prison camp.  Most of the Boers at Deadwood are in good health, and thus far there has been but one death from enteric fever.
Considering the isolation of St Helena, surrounded by thousands of square miles of ocean, escape was virtually impossible.  Yet, on 2 February 1901, four prisoners, including Sarel Eloff, made a determined attempt at Sandy Bay.  Having collected a quantity of provisions, the four men seized an old fishing boat in which to make their escape.  However, fishermen removed the oars and, despite a struggle, managed to hold on to them.  The prisoners climbed into the boat and tore up the bottom boards, intending to use them as paddles.  Finding them to be useless, the prisoners then returned to the beach and tried in vain to bribe the fishermen, offering them a good sum in exchange for the boat and oars.  In the meantime, a messenger had been sent to report the occurrence and soon after dawn a guard arrived from Deadwood Camp to arrest the escapees.

Another escape was attempted by two Frenchmen amongst the prisoners.  Whilst bathing off the beach at Rupert's Bay, they tried to swim to a ship at anchor. Spotted by the guardship, guns were directed against them and they were challenged, whereupon one turned and swam back to Rupert's Bay, whilst the other swam to the landing steps at Jamestown, only to be escorted back to camp.

The most enterprising attempt to escape was by made by Andries Smorenburg who made a crate and "mailed" himself from Saint Helena on the Union Castle Mail Ship SS Goth.  In the event he was discovered when the ship was out at sea, landed at Ascension, handed over to the authorities and returned to St. Helena. (See The Boer in The Box, 1902).
It was inevitable that there were occasional spots of serious trouble. For example, on one Saturday night early in 1901 a prisoner was shot by a sentry. It emerged at the Military Court which followed that for some time the prisoners had been pelting the sentries with stones, sticks, tin cans and other missiles, and that the sentry in question had been struck in the face on that occasion.
It was also inevitable that a number of prisoners would die on the island. The Anglican Church on St. Helena refused consecrated ground for a cemetery because the Boer prisoners were 'Enemies of Her Majesty'. Fortunately the Baptist Church felt differently and granted ground for a cemetery near its stately building overlooking the now well-cared for burial ground.  The church building was also put at the disposal of the prisoners for the conduct of their religious services.  167 Prisoners are buried here, the graves arranged in neat terrace-like rows on a steep incline of about 40 degrees.  At the bottom two imposing red-brown granite monuments record the grave numbers, names and ages of the dead. One of these was erected by the prisoners while they were detained on St Helena, whilst the second was put up by the Union Government during 1913.﻿ 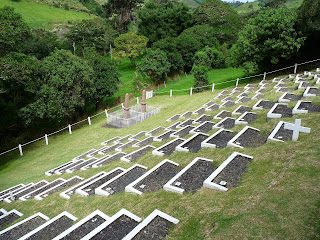 Just what I was looking for - thanks for the efforts. Nice pics as well. I stayed there for 3 months as my friend Hazel has purchased the Consulate Hotel and transformed it.

This site is just what I was looking for! I'm trying to find out about a Transvaal Boer named Diederick Laffnie, who was probably on the island and may have died there. Can I consult a list of the graves? He was accompanied, I think, by a younger man, perhaps a son, John Samuel Laffnie, who appears to have returned to South Africa alone after the war ended.

Any help or advice from you would be gratefully received.

Can send me more info

Looking for my great great Grandfathers name who was a prisoner in St. Helena. His name was Arnoldus Stephanus Pieterse from Rustenburg..thank you

So far as I can see there were 19 prisoners on St Helena with the surname Pieterse, none of whom match Arnoldus Stephanus.
You can see the list if you search www.angloboerwar.com then Name and Camp.

Have recently discovered that my great-grandfather was a POW on St Helena during the Boer War. His family was incarcerated at a British concentration camp in Pietersburg. Is there anywhere that I can find a database of prisoners on St Helena?

Hi Anne,
Can you let me have your great-grandfather's full name and I will search the sites that I know of.
You can also search www.angloboerwar.com then Name and Camp.

You can e-mail me if needed at
paulinegrimshaw@yahoo.co.uk

This will make it easier to cut and paste any further information I find.