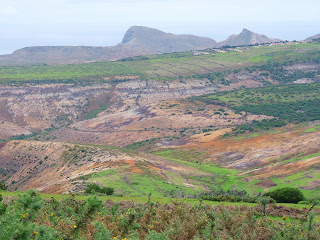 Line of The Wall from Flagstaff
The Great Wood Wall around Middlepoint, crossing Bilberry Field Gut and rising towards Bottom Woods is all that remains of the stone wall built by the East India Company in an attempt to protect its own future wood supplies in The Great Wood from destruction from “browsing by goats and rooting by swine”.  Built in the period 1723 – 1727, mainly by Governor John Smith only about 150 acres were completely enclosed, the scheme was ultimately unsuccessful, none of the original trees remain and only around 800 metres of the original wall. 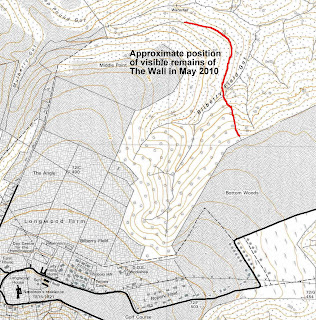 ﻿
The best exposition of the "devastation of the native vegetation and the ecological despoilaton" of St. Helena, The Wall and The Vanishing Great Wood can be found in Ashmole and Ashmole, St Helena and Ascension Island: a natural history.  Published by Nelson in 2000. 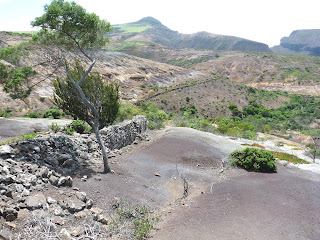 Looking North towards Flagstaff
Janisch’s Extracts from the St Helena Records describes, year after year, the frustration and impotence of successive Governors to prevent the over-exploitation and ultimately the destruction of the natural assets of St. Helena.   http://openlibrary.org/books/OL23471107M/Extracts_from_the_St._Helena_Records 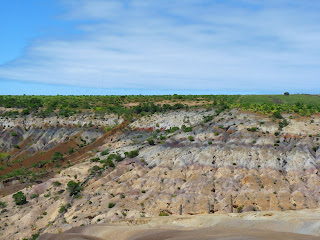 Rising from Bilberry Field Gut towards Bottom Woods
Both Beatson’s 1816 “Tracts relative to the Island of St. Helena and JC Melliss’ 1875 “Physical, Historical and Topographical Description of the Island” describe in detail, to quote Ashmole “the inexorable progress of the tragedy of the commons, the remorseless destruction of a potentially sustainable resource by a number of independent exploiters following their own self-interest even though the result in the long run is a disaster for everyone. 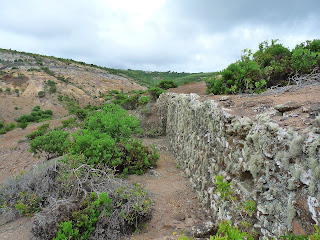 Looking South-East across Bilberry Field Gut
Alfred Russel Wallace in “Island Life” published in1880 summarised the effects on St. Helena by European occupation. When first discovered, in the year 1501, St. Helena was densely covered with luxuriant forest vegetation, the trees overhanging the seaward precipices and covering every part of the surface with an evergreen mantle.  This indigenous vegetation has been almost wholly destroyed; and although an immense number of foreign plants have been introduced, and have more or less completely established themselves, yet the general aspect of the island is now so barren and forbidding that some persons find it difficult to believe that it was once all green and fertile.  The cause of the change is, however, very easily explained.  The rich soil formed by decomposed volcanic rock and vegetable deposits could only be retained on the steep slopes so long as it was protected by the vegetation to which it in great part owed its origin.  When this was destroyed, the heavy tropical rains soon washed away the soil, and left a vast expanse of bare rock or sterile clay.  This irreparable destruction was caused in the first place by goats, which were introduced by the Portuguese in 1513, and increased so rapidly that in 1588, they existed in thousands.  These animals are the greatest of all foes to trees, because they eat off the young seedlings, and thus prevent the natural restoration of the forest.  They were, however, aided by the reckless waste of man.  The East India Company took possession of the island in 1651, and about the year 1700 it began to be seen that the forests were fast diminishing, and required some protection.  Two of the native trees, redwood and ebony, were good for tanning, and to save trouble the bark was wastefully stripped from the trunks only, the remainder being left to rot; while in 1709 a large quantity of the rapidly disappearing ebony was used to burn lime for building fortifications.  By the records quoted in Mr. Melliss' interesting volume on St. Helena it is evident that the evil consequences of allowing the trees to be destroyed were clearly foreseen, as the following passages show: "We find the place called the Great Wood in a flourishing condition, full of young trees, where the hoggs (of which there is a great abundance) do not come to root them up.  But the Great Wood is miserably lessened and destroyed within our memories, and is not near the circuit and length it was.  But we believe it does not contain now less than fifteen hundred acres of fine woodland and good ground, but no springs of water but what is salt or brackish, which we take to be the reason that that part was not inhabited when the people first chose out their settlements and made plantations; but if wells could be sunk, which the governor says he will attempt when we have more hands, we should then think it the most pleasant and healthiest part of the island. But as to healthiness, we don't think it will hold so if the wood that keeps the land warm were destroyed, for then the rains, which are violent here, would carry away the upper soil, and it being a clay marl underneath would produce but little; as it is, we think in case it were enclosed it might be greatly improved" ... "When once this wood is gone the island will soon be ruined" ... "We viewed the wood's end which joins the Honourable Company's plantation called the Hutts, but the wood is so destroyed that the beginning of the Great Wood is now a whole mile beyond that place, and all the soil between being washed away, that distance is now entirely barren."  In 1709 the governor reported to the Court of Directors of the East India Company that the timber was rapidly disappearing, and that the goats should be destroyed for the preservation of the ebony wood, and because the island was suffering from droughts.  The reply was, "The goats are not to be destroyed, being more valuable than ebony." Thus, through the gross ignorance of those in power, the last opportunity of preserving the peculiar vegetation of St. Helena, and preventing the island from becoming the comparatively rocky desert it now is, was allowed to pass away. Even in a mere pecuniary point of view the error was a fatal one, for in the next century (in 1810) another governor reports the total destruction of the great forests by the goats, and that in consequence the cost of importing fuel for government use was £2,729. 7s. 8d. for a single year.
﻿﻿﻿﻿
﻿﻿﻿﻿ 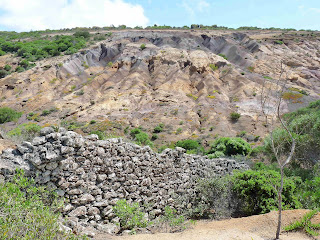 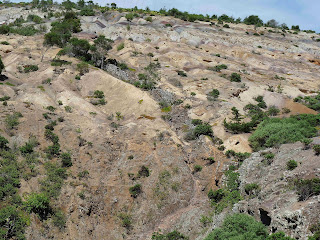 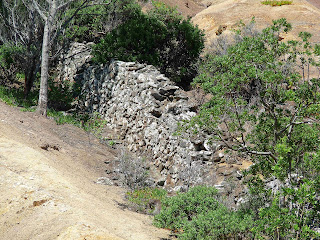 Very interesting. I wish I'd known about this when I was crawling over the island in 2009 - I'd have tried to follow it. Simon Pipe, UK