The most accessible source of information on ecclesiastical buildings on St. Helena is Edward Cannan’s “Churches of the South Atlantic Islands 1502-1991” from which the basic outline and some of the detail below has been taken. Cannan was Bishop of St. Helena from 1979 to 1985.
The East India Company’s first Chaplain, William Noakes, arrived on the island in 1671 and Cannan opines that the Jamestown’s first Anglican Church must have been built shortly thereafter.  Janisch’s Extracts from the St Helena Records trace the deterioration of this building and the embarrassment of the Churchwardens at its state.
30th September 1678.  The Church suffered damage by the extreme heat of the weather to be examined and repaired.  Also ordered that half a measured acre of ground about the said Church be forthwith enclosed by the Inhabitants to be and remain for a Public Church Yard or burying place—the said enclosure shall be by a bank cast up out of a ditch that shall be five foot in breadth and five foot in depth upon the Topp whereof shall be set Lemon Trees round the whole enclosure and a Gate shall be made with a bridge to goe over the Ditch for a comely and convenient entrance and passage to and from the said Church and Church Yard.
Oct 26 1691.  The Chappel in Town in bad repair and the Roof in danger of falling.
April 7 1711.  The Churchwardens petition that whereas our Churchyard at the Fort is very small and hardly room to dig a grave for rocks and graves already digged also our yard wall is very bad and irregular we pray that we may inlarge our yard backwards by cutting the water in a new course near the hill and have liberty of ranging the front wall with the street.  The Petitioners are answered that its commendable in them to promote the putting that piece of rubbish called a church yard in order; it’s for the credit of the island, and we advise you to repair the Church or it will tumble down in a little time.
Sept. 30.1732.  Churchwardens letter to Governor.  Vestry meeting concerning ruinous condition both of the Chapple in the Country and the Chapple at the Fort the former of which has laid level with the ground for two or three years past, and the latter is so much out of repair that it’s shameful a place set apart for the celebration of divine service and in the open view of all strangers especially of foreign nations.
Captain Cook described Jamestown in May 1771:  The greater part of the houses are ill built.  The church, which was originally a mean structure, is in ruins and the market-place nearly in the same condition.
Finally in 1772 preparations were made for building the present St James’.  Cannan gives details of the costs of construction and fitting out which included £1 12s 11d for 10 gallons of arrack for workmen and wages of masons at 18d/day.  Janisch records on Feb. 2, 1774.  Three Houses built upon the ground where the Old Church stood for the use of the Comp. Servants i.e. the three Govt. Houses next above St. James and which therefore mark the site of the Old Church. 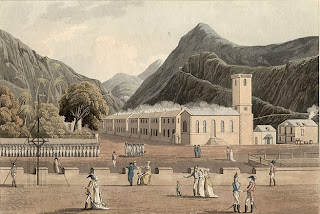 George Hutchins Bellasis.  Scene taken from the Castle Terrace.  Plate 3 from Views of St. Helena from a sketch made in 1804/05.  The Church had a tower at the West end but no spire or North porch.
Completed in 1744 it is the oldest Anglican Church South of the Equator.  The oldest surviving Anglican Church in continuous use outside the UK is St Peter’s in Bermuda, parts of whose current structure date from 1620 though the building has been much expanded since. http://en.wikipedia.org/wiki/File:St._Peter%27s_Church_-3.jpg
Returning in May 1775, Cook noted that “within these three years a new church has been built and some other new buildings were in hand.
Bellasis was a professional soldier in India where his Father, a Major General with the HEIC, and three of his brothers were also serving.  Arriving in Bombay in July 1801 he suffered recurring bouts of illness in 1802-1803, and eventually departed for Britain in August 1804.  However, he was so ill during the voyage that he was forced to disembark at St. Helena on 4 November 1804 to recover his health.  He stayed on the island for the next eight months, later revisiting in 1812, and during his first visit he sketched the “diverse landscapes and inhabitants of the island” and his “Views of St. Helena” was published in 1815, with six of his original landscapes engraved in aquatint by Robert Havell.
Published on November 1st 1815, shortly after Napoleons’ arrival on the Island the book is dedicated to The Duke of Wellington....The Island of Saint Helena being at this time an object of interest to the whole world.  It was Bellasis' hope that his illustrations would "at the present period be the more interesting, when this singularly romantic Island is the appointed residence of one of the most extraordinary men recorded in the annals of History."  In 1801 Wellington, then Colonel Arthur Wellesley, was a neighbour of Bellasis’ father in Bombay and had met George there, so the dedication is no surprise and the timing of the publication surely no coincidence.
He refers twice more to Napoleon:
Plate 2.  .......Near the opening between the two mountains, Ladder Hill on the right, and Rupert's Hill on the left, is a small knoll, or conical hill, at the foot of which is a house called the Briars, marked in this View, though not seen from the Roads; this situation is the more interesting, as it is said to be the place intended for the residence of Buonaparte.
Plate 3.  ........At the head of the valley is shown the Briars, the intended residence of Buonaparte. 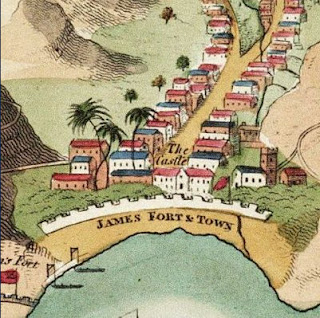 James Fort, Town and Church from Read's map of St Helena 2nd Edition, 1817﻿
Janisch records that by July 1835.  Church Steeple in danger of falling and ordered to be taken down.  It was dismantled and in 1843 a new tower and porch were built by the north door, as it is today, but with a spire surmounting the tower 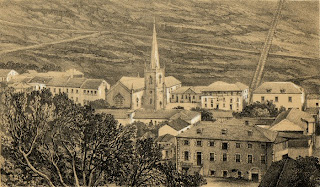 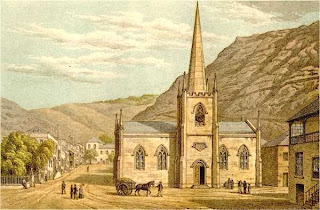 JC Melliss, 1875
By 1862 the white ants (termites) reputedly from wood used from a captured slave vessel ravaged the town and the church had to be closed for public worship, services being held in the Court House and in St John’s.  The damage was such that a Committee was set up to decide whether to repair the church or rebuild it.  In February 1865 it was decided to carry out repairs and modifications and £1,151 was expended carrying these out.
Jackson in 1905 commented on the island’s churches:  None of the churches can lay much claim to architectural beauty, the most imposing is that of St. James', which it is generally considered should be the Cathedral, seeing that it is situated where the greater number of people are compelled to live, and also that it is in all probability the site, or very near the site, on which the first chapel was built by the Portuguese. 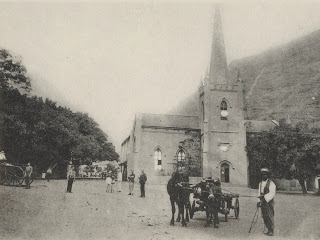 St James' 1902
The spire continued to be a constant source of problems and in 1980 the decision was taken to remove it.  A plaque in the church porch marks the safe completion of this operation which left the church as one sees it today.

According to Quentin Keynes' August 1950 National Geographic article "St. Helena: The Forgotten Island" the spire was "surmounted by a fish instead of the usual weathercock" 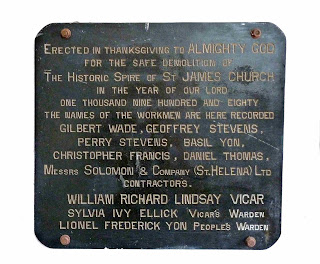 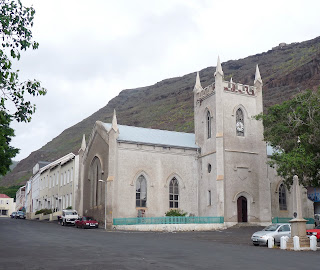 As at today the spire has been restored. Details (and photos) on

As at today the spire has been restored. Details (and photos) on http://sainthelenaisland.info/stjames.htm